According to Hindu Puranas, it is said that Dev Guru Brihaspati had built an ashram here. Another story about it is that Lord Rama resided here during his 14 years of exile. Brihaspati Kund is also known as Niagara Falls of India. It is very famous for its natural beauty. It is located in the Panna district which is 37 KM from Panna, 75 KM from Chitrakoot, and 50 KM from Banda. Kalinjar Fort is only 29 kilometers away from Brihaspati Kund. The height of Brihaspati Kund is about 400 feet. It is situated near Pahadi Kheda village of Panna district. The path to reach the bottom of Jupiter Kund is very narrow and hilly. That is an adventure in itself. People also come here to enjoy camping and trekking. Due to the beauty of this place, people come here to have a picnic with their families and admire the natural beauty. Brihaspati Kund is situated on the Baghin River. The river originates from the Panna hills. This waterfall is very vast and high so the sound of water falling from the waterfall can be heard from far away.

Shabri waterfall is in Chitrakoot. It is one of the most beautiful places in Bundelkhand of Uttar Pradesh. This waterfall falls from the height of 40 feet in three parallel streams passing through the dense forests. Water collects in a pond, and again this water goes forward and falls from a height of 100 feet. Due to this, its beauty looks more attractive. It is said that in the mythological period, Lord Rama took a bath at this place after eating fruits from Shabari Mata, and for that reason, the name of this place was named Shabari Kund. Shabari Falls is 53 km from Brihaspati Kund. This waterfall is 47 km from Chitrakoot and 108 km from Banda. It is located in Dudaila village in Chitrakoot district. The best time to visit the Shabri waterfall is during the rainy season. Due to this more water flow is seen here. The best time to visit the Shabri waterfall is between July to September. Although people come here till December, in winter the water here becomes very less. So, the waterfall loses its beauty.

This place is a beautiful spiritual place near Manikpur-Satna. Here people experience natural spirituality. There is a small reservoir in this ashram. It is said that there was a dialogue between Yaksha and Yudhishthira in this reservoir. Yudhishthira gave all the answers to Yaksha’s questions and got his brothers alive. This place attracts tourists with its beauty and serenity.

It is located in the Mahoba district of Bundelkhand. which was built by the Chandelas. It is a good example of Indian cultural heritage. It is located near Rahiliya village, 3 km south of Mahoba. The Chandela kings used to worship Surya in this temple. Worshiping the Sun is considered a source of energy, health, and positivity. This temple was built by the fifth Chandela king Rahila Devvarman. By the name of the king, this temple was named Rahila mandir. The architecture of Rahila Sagar Sun Temple is in Pratihara style. In this temple granite stones have been used, the use of these stones can also be widely seen in the Khajuraho temples. This temple is open from three sides according to the Vastu Shastra and closed from the west side. The nearest airport to this temple is Khajuraho, New Delhi, and Lucknow. The distance of Khajuraho Airport from the temple is 70 km. The nearest railway station is Mahoba. Inside the Rahila Sagar Sun Temple, a lake, sun temple, flagon, and a beautiful park are situated. It is said that the water of this pool never dries up. The Chandela rulers used to worship the Sun only after taking a bath in the pool.

Kalinjar Fort is located in Banda district of Bundelkhand. It is situated on Vindhya mountain, 97 km from Khajuraho. This fort had been considered impregnable and invincible. There are many ancient temples in this fort, some from the Gupta period. There is a Shiva temple here, about which it is believed that Lord Shankar did penance here after consuming the poison emanating from the churning of the ocean. A fair is held here on the day of Kartik Purnima. In ancient times, this fort remained under the Chandela Rajputs and then again under the Solankis. In this fort Mahmud Ghaznabi, Qutubuddin Aibak, Sher Shah Suri, Humayun attacked to win this, But they were not able to win it. During this victory campaign, Sher Shah Suri was killed by a cannon shot. During the Mughal period, Akbar succeeded to win this fort. After this, it came under the possession of King Chhatrasal Bundela.  when Chhatrasal Bundela defeated the Mughals in a long period of war. During the British period, the British got a lot of hard work to control here. Since independence, it has been under the Archaeological Survey of India as an important historical heritage. Kalinjar Fort is situated at an altitude of 1203 feet above sea level. The height of Kalinjar Fort is 60 meters. It is built between other mountains of the Vindhyachal mountain range Mayfa mountain, Fatehganj mountain, Pathar Kachar mountain, Rasin mountain, Brihaspati Kund mountain. This fort has a 20000-year-old Shankhalipi. In which there is a mention of Lord Rama coming to Kalinjar in the Ramayana period. It is considered the best fort of the medieval period. Gupta style, Pratihara style, Panchayatan Nagar style, etc. have been used to build this fort. It has been built according to the Agni Purana, Brihat-Samhita, and Vastu Shastra. There are many temples built in the middle of the fort. There are 7 doors to enter the fort. Which are adorned with different building styles. It is said that the treasures of ancient kings are hidden here. Whose secret no one knows till date. There are two ponds in this fort named Buddha, Buddhi. Which have great medicinal value. This fort is situated 105 KM from Khajuraho, 78 KM from Chitrakoot, 62 KM from Banda, and 205 KM from Allahabad.

It is located in the Panna district at a distance of 14 km from Panna and 34 km from Khajuraho. This waterfall is formed by a tributary of the Ken River. Its height is 30 meters, which falls into a heart-shaped pond. It is a wonderful place surrounded by lush green forests. There are some caves from the Pandava era. It is said that the Pandavas resided here during their exile.

It is situated between the Panna and the Chhatarpur districts of Bundelkhand. It was declared a wildlife sanctuary in 1981. Which has an area of ​​542 square kilometers, in the year 2011 it was designated for Biosphere Reserve. The Ken River is the main attraction in this park. The main flora of this park is bamboo, teak, Boswellia. Many rare and endangered species have been preserved in this sanctuary. The main animals found here are tigers, leopards, chital, chinkara, nilgai, sambar, and bear. More than 200 species of birds are found here. In which the red-headed vulture, honey buzzard, and Indian vulture are the main ones. It comes under the protected area under Project Tiger.

Khajuraho temples are world-famous. Which is famous for its antiquity and artifacts. Which are beautiful, complex, full of awe and wonder. People come from abroad to see the beauty of this place. The temples built by the Chandela dynasty can be classified into three groups: Eastern, Western and Southern.

Orchha was founded by the Rajput Bundela king Rudra Pratap in the sixteenth century. Wildlife Sanctuary, Orchha Fort, and its captivating architecture, Sheesh Mahal, etc. are prominent in Orchha. River rafting is also done here in the Betwa river.

It is located in the Chitrakoot district and is mainly famous for its spiritual and natural serenity. It is known for many famous temples mentioned in Hinduism. It has been the Tapo Bhoomi of the great saint Goswami Tulsidas. Lord Rama spent 11 years of his exile in Chitrakoot Dham. In this place, Bharat had come to meet Ram Ji, whose place is named Bharat Milap. The major places of interest in Chitrakoot are Ramghat and Arogya Dham, Gupt Godavari Cave, Kamadgiri Temple, Sati Anasuya Ashram, Hanuman Dhara Temple, Sphatik Shila, etc. 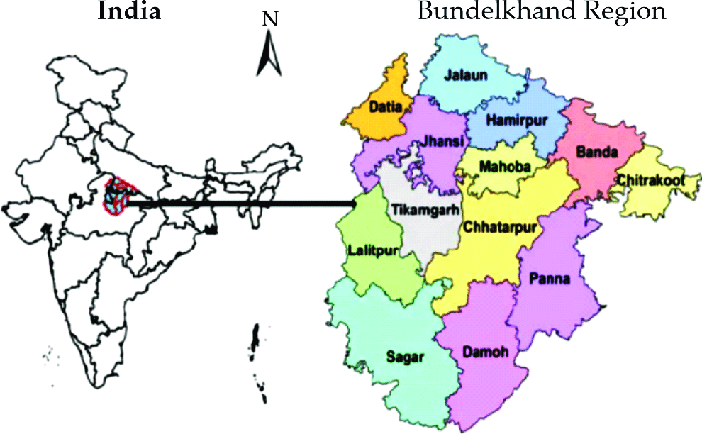 Is demand for a separate Bundelkhand state justified?

The demand for a separate Bundelkhand state in India is a complex issue that has been debated for many years. Bundelkhand region covers an area